This framework of how Jesus did and did not fit the expectations of His first-century audience and how Jesus, the secret king, set up His secret kingdom brings so much depth to our own understanding of Jesus’ words, actions, and events of the Gospels.  And it explains the reaction to Him that sometimes puzzles us.  The Jews, including John the Baptist, tried to interpret the coming of Jesus with a distinctively Old Testament mindset.  Of course, this was entirely appropriate as this was the revelation they had.  And it was God’s revelation.

Throughout the Scriptures, God’s revelation is always true, but not always complete.  We cringe at the idea of God’s revelation being progressive.  We don’t want to hear anything that may alter our understanding of our eternal God; the same yesterday, today, and forever.  Please understand the difference.  The character and attributes of God have never changed and will never change.  He is without beginning and without end, always the holy and unique God of creation.  There is nothing progressive about God’s character or attributes.  But His revelation is progressive and at the time of Christ, most Jews – scholars included – were totally unprepared for Who was coming and the manner in which He came.

This chart from the book, The Parables of Jesus by David Wenham, shows the Old Testament view that most Jews of Jesus’ day were operating under. 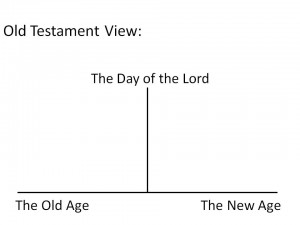 The Jews, both scholarly and simple, expected the Messiah to arrive explosively and carry out His judgment and restoration immediately.  The arrival of the Messiah would be the clear demarcation between the old age and the new age.  Both a casual or detailed reading of the Old Testament fit this picture.  Given the advantage of hindsight regarding our Lord Jesus Christ and the explanation of the New Testament writers, Jesus’ coming to earth looked more like this (from The Parables of Jesus). 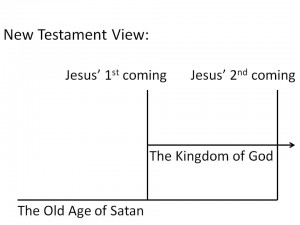 The Old Testament was actually announcing two comings.  Sometimes even in the same verse (Isaiah 61:2).  At His first coming, Jesus came to usher in the kingdom of God through His death on a cross thus providing the way for us to be saved from our sins and to become citizens of God’s kingdom.  Judgment was not the goal of Jesus’ first coming which He made clear in both word and action.  Jesus’ second coming will fulfill all the Old Testament prophesies regarding vengeance, judgment, and His righteousness covering the earth.  That is why studying Revelation alongside the Old Testament enhances its understanding.  Satan’s kingdom will be brought to an end and God’s kingdom, currently underground if you will, will become public in dramatic fashion and will continue forever.  The secret king will be worshipped by all and take His rightful place on a public throne.

So, with all this in mind, it is no surprise that Jesus’ first coming brought mixed reactions from His audience and similarly the operation of His secret kingdom today can be confusing without careful study and spiritual understanding.  That is why it is so imperative that we understand what exactly Jesus said about His kingdom of which we are citizens.  We need to know.  How are we to live in the kingdom of God, in the here and now?  Understanding the principles of how the secret kingdom operates in the church age and how we are to live accordingly is what the next several posts are about.

2 thoughts on “The Secret Kingdom”