When you believed the gospel message of Jesus Christ … you received a NEW POWER OVER SIN.

One aspect of the overflowing power that we wrote about yesterday is our new power over sin.  This is sadly one of the most misunderstood provisions of the New Covenant.  And it would be bad enough if it were simply due to a lack of knowledge.  And while there certainly is a lack of teaching in the church on our new identity in Christ and all that Christ accomplished both FOR us and IN us, the sad reality is that there are volumes of teaching that deny, contradict, and distort the promise and provision of the New Covenant that is ours in Christ Jesus.  And one of the most powerful of these overlooked promises is your freedom from sin’s power.

“Knowing this, that our old self was crucified with Him, in order that our body of sin might be done away with, so that we would no longer be slaves to sin; for he who has died is freed from sin.  Now if we have died with Christ, we believe that we shall also live with Him, knowing that Christ, having been raised from the dead, is never to die again; death no longer is master over Him.  For the death that He died, He died to sin once for all; but the life that He lives, He lives to God.  Even so consider yourselves to be dead to sin, but alive to God in Christ Jesus … For sin shall not be master over you, for you are not under law but under grace.”   Romans 6:6-11, 14

“Now those who belong to Christ Jesus have crucified the flesh with its passions and desires.  Since we live by the Spirit, let us also walk by the Spirit.”   Galatians 5:24-25

“He Himself bore our sins in His body on the cross, so that we might die to sin and live to righteousness; for by His wounds you were healed.”   I Peter 2:24

“For the grace of God has appeared, bringing salvation to all men, instructing us to deny ungodliness and worldly desires and to live sensibly, righteously and godly in the present age, looking for the blessed hope and the appearing of the glory of our great God and Savior, Christ Jesus, who gave Himself for us to redeem us from every lawless deed, and to purify for Himself a people for His own possession, zealous for good deeds.”   Titus 2:11-14 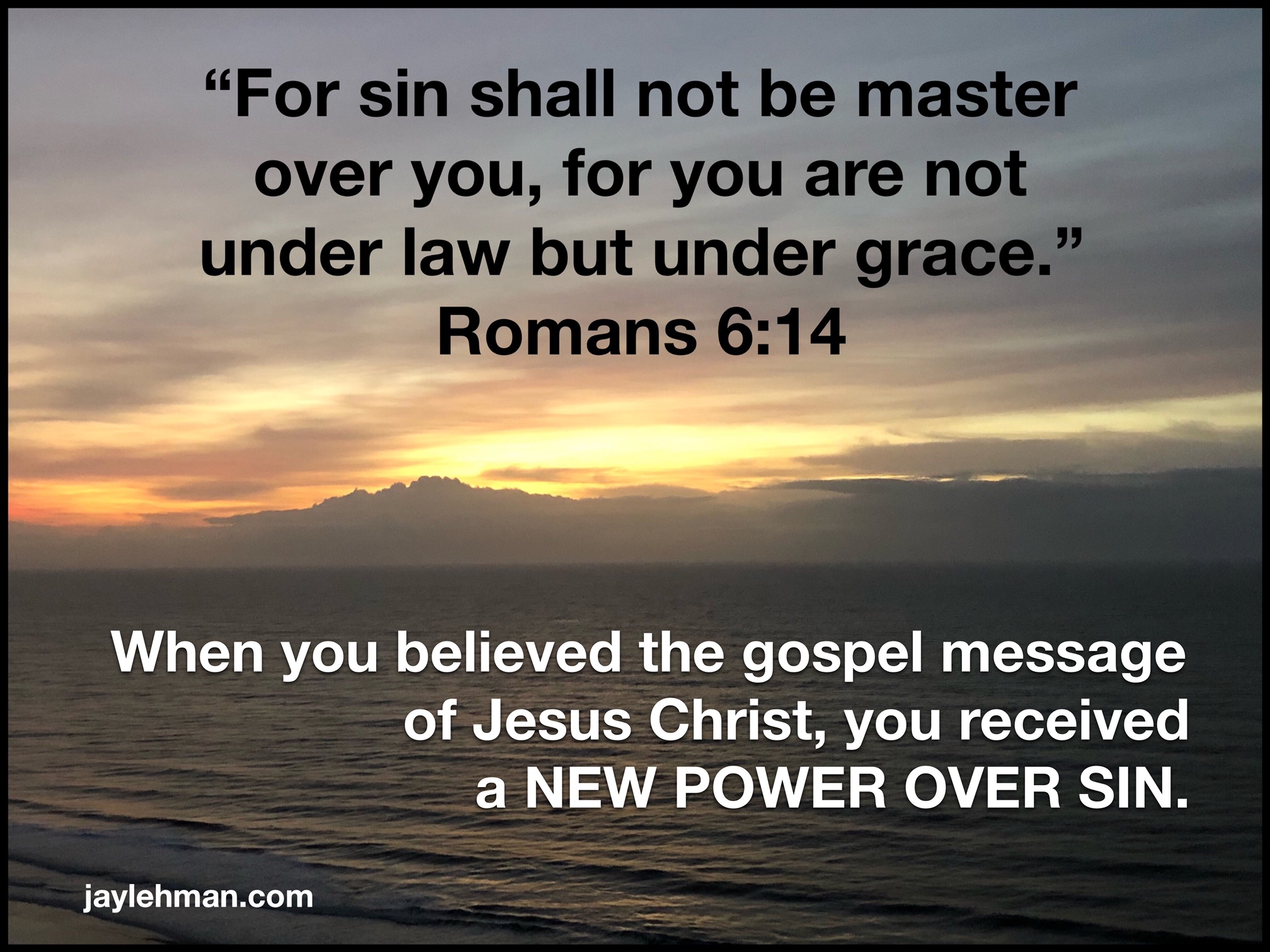 When you believed the gospel message of Jesus Christ … you were filled to overflowing with a NEW POWER.

The word “power” appears over a hundred times in the New Testament.  Some of those references are to displays of Christ’s divine power while here on earth and in His future return.  A few refer to the specific power of God in raising Christ from the dead.  Some verses describe the power of the evil one.  But many of these “power” verses portray the power of God living and working in us, His children.  You indeed have been filled to overflowing with a new power.

“But you will receive power when the Holy Spirit has come upon you.”   Acts 1:8

“For the word of the cross is foolishness to those who are perishing, but to us who are being saved it is the power of God.”   I Corinthians 1:18

“And He said to me, ‘My grace is sufficient for you, for power is made perfect in weakness.’  Most gladly, therefore, I will rather boast about my weaknesses, so that the power of Christ may dwell in me.”   II Corinthians 12:9

“So that you may know … the surpassing greatness of His power toward us who believe.”   Ephesians 1:19

“That He would grant you, according to the riches of His glory, to be strengthened with power through His Spirit in the inner man.”   Ephesians 3:16

“Now to Him who is able to do far more abundantly beyond all that we ask or think, according to the power that works within us.”   Ephesians 3:20

“That I may know Him and the power of His resurrection.”   Philippians 3:10

“Strengthened with all power, according to His glorious might, for the attaining of all steadfastness and patience; joyously giving thanks to the Father, who has qualified us to share in the inheritance of the saints.”   Colossians 1:11-12

“For this purpose also I labor, striving according to His power, which mightily works within me.”   Colossians 1:29

“For our gospel did not come to you in word only, but also in power and in the Holy Spirit.”   II Thessalonians 1:5

“For God has not given us a spirit of fear, but of power and of love and of a sound mind.”   II Timothy 1:7

“Seeing that His divine power has granted to us everything pertaining to life and godliness, through the true knowledge of Him who called us by His own glory and excellence.”   II Peter 1:3

“After these things I heard something like a loud voice of a great multitude in heaven, saying, ‘Hallelujah! Salvation and glory and power belong to our God.’ “   Revelation 19:1 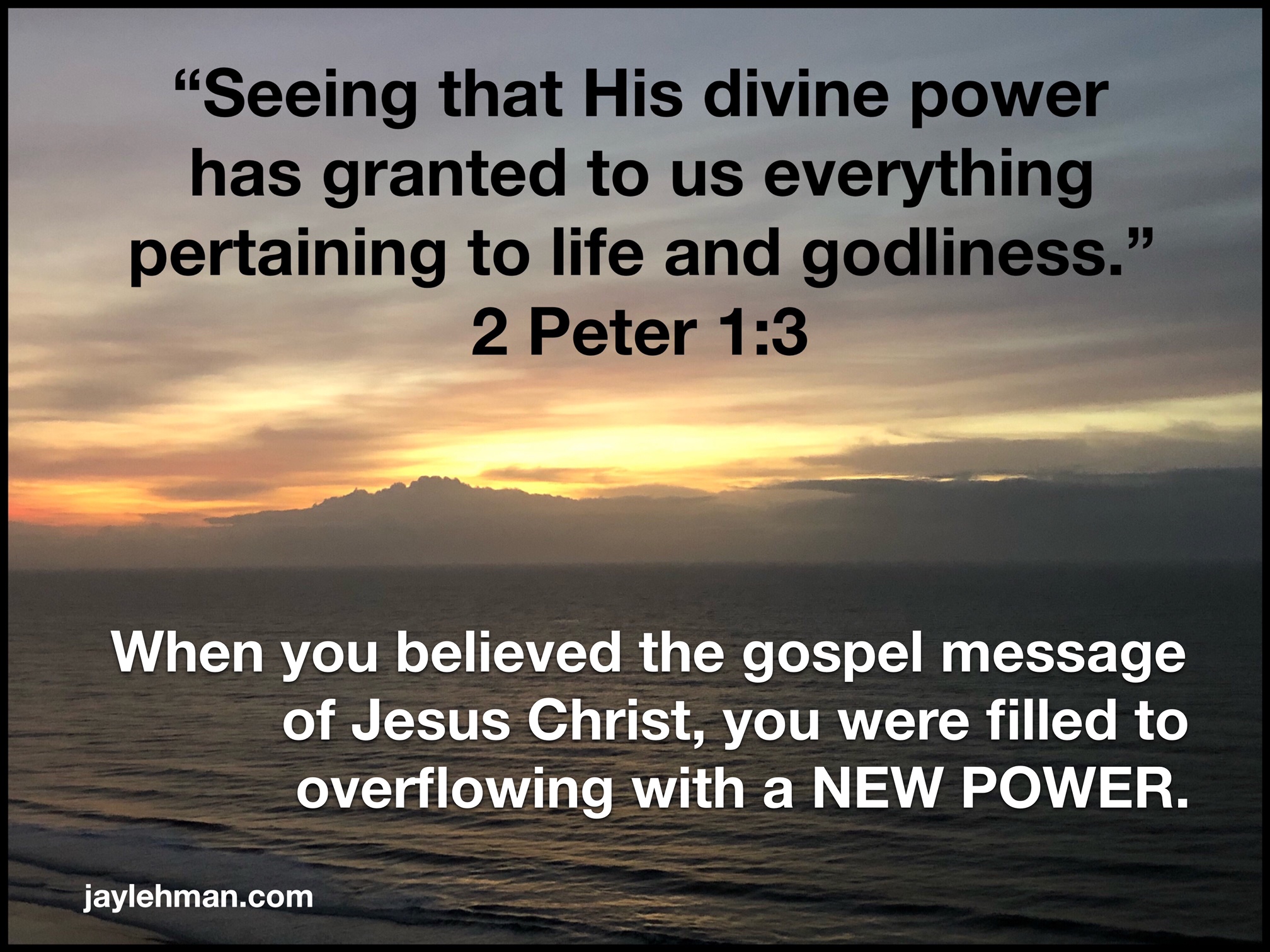 When you believed the gospel message of Jesus Christ … you gained a NEW FREEDOM.

Freedom is one of my favorite words to describe the Christian life.  Jesus was not a political liberator.  He was a spiritual liberator.  He came to pronounce freedom from the sin that enslaved us.  And His freedom removes the chains of guilt, shame, pride, fear, worry, unworthiness, and the power of sin itself.  But experiencing this freedom is not automatic.  We need to believe it, live it, and walk in it.  Christ has given you everything you need to throw off your chains.

“The Spirit of the Lord is upon me, because He has anointed me to proclaim good news to the poor.  He has sent me to proclaim liberty to the captives and recovering of sight to the blind, to set at liberty those who are oppressed.”   Luke 4:18

“Our old self was crucified with Him, in order that our body of sin might be done away with, so that we would no longer be slaves to sin; for he who has died is freed from sin.”   Romans 6:6-7

“For the law of the Spirit of life in Christ Jesus has set you free from the law of sin and of death.”   Romans 8:2

“It was for freedom that Christ set us free; therefore keep standing firm and do not be subject again to a yoke of slavery.”   Galatians 5:1

“For you were called to freedom, brothers.  Only do not use your freedom as an opportunity for the flesh, but through love serve one another.”   Galatians 5:13 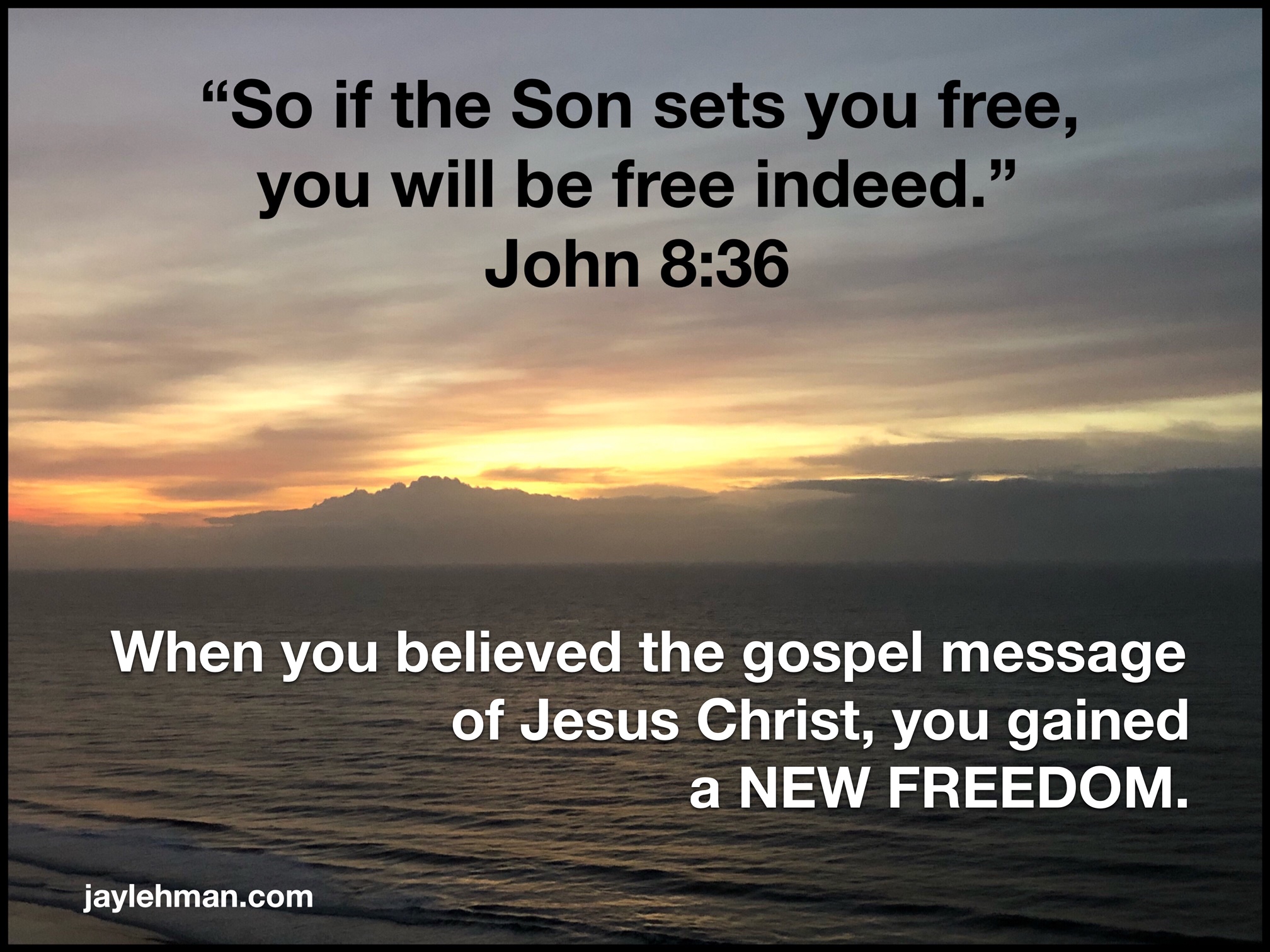 When you believed the gospel message of Jesus Christ … you entered a NEW COVENANT.

Under God’s old arrangement, we stand guilty of breaking His Law.  But that all goes by the wayside when we agree to God’s new arrangement by acknowledging our guilt, accepting the free gift of Christ’s death in our place, and embracing what Jesus says as true.  When we do this, we are believing the gospel message of Jesus Christ.  And all the promise and provisions of the New Covenant become ours.

“Our adequacy is from God, who made us adequate as servants of a new covenant, not of the letter but of the Spirit; for the letter kills, but the Spirit gives life.”   II Corinthians 3:5-6

“When God said, ‘A new covenant,’ He has made the first one obsolete.  And whatever is becoming obsolete and growing old is ready to disappear.”   Hebrews 8:13

“Jesus is the mediator of a new covenant … so that those who have been called may receive the promise of the eternal inheritance.”   Hebrews 9:15. 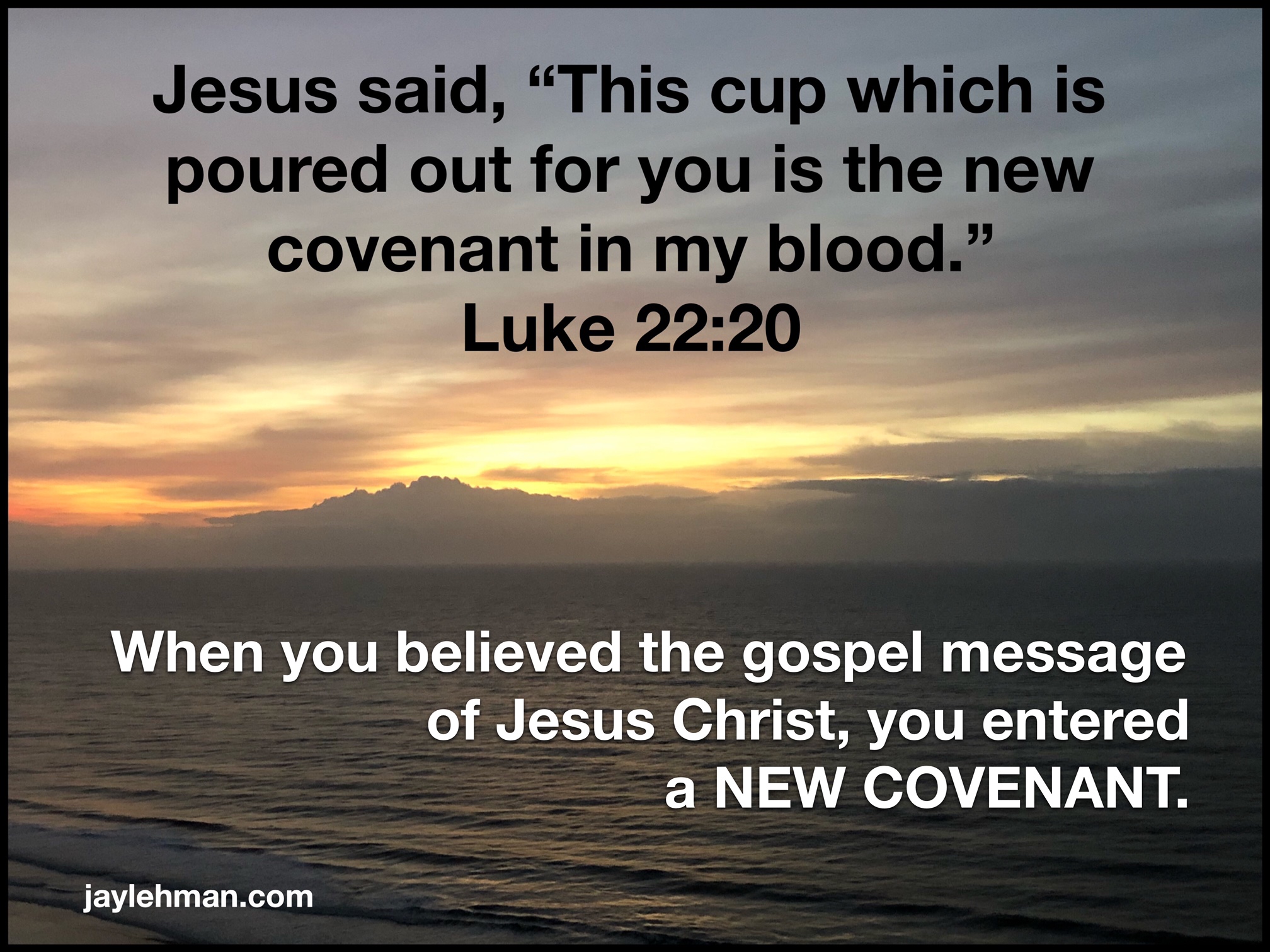 When you believed the gospel message of Jesus Christ … you received a NEW SELF.

When the Bible talks about “putting on the new self”, it is describing someone who is living in line with their new nature.  Remember “partakers of the divine nature” from yesterday’s post?  Well, just like our new nature, this new self has been created with a likeness to God that is righteous and holy.  Your old self with its sin nature was crucified with Christ.  Your new self, however, is constantly being renewed in the image of your Creator.

“Put on the new self, which in the likeness of God has been created in true righteousness and holiness.”   Ephesians 4:24

“Knowing this, that our old self was crucified with Him, in order that our body of sin might be done away with, so that we would no longer be slaves to sin.”   Romans 6:6

“Do not lie to one another, seeing that you have put off the old self with its practices and have put on the new self, which is being renewed in knowledge after the image of its creator.”   Colossians 3:9-10